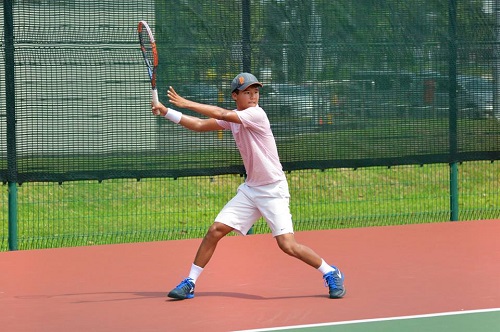 Recently Ethan Lye become Singapore's youngest open champion by winning 2016 Singapore Tennis Assosication (STA) Open at age 14. He achieved this by downing the No. 1 and No. 3 seeds along the way. Truly a inspirational story..


Here we look back at some of the trials and tribulations of Ethan Lye's and his family tennis journey in Sydney Australia, a still long journey towards full professional tennis status for Ethan.

For Singaporean couple, Vera and Moses Lye, chasing their own long-term dream for their son, 13-year old age group tennis star Ethan Lye, has meant much more than just long days on the practice net. In fact, equally impressive as the advances their son has made on-court, are the efforts and sacrifices that ‘Team Ethan’ have made behind the scenes to give the young tennis prodigy every opportunity to shine.

For one remarkable Singaporean mother, journalist and homemaker, her own answer was clear. Vera Lye’s biggest regret would be not giving her son every opportunity to succeed in tennis: “We have always allowed Ethan to dream big — and never once told him it wasn’t possible,” she says.

At age 10, Ethan was offered a scholarship at an academy in Chiang Mai, Thailand. Three years on, he is in the midst of a three-year partial scholarship at the Voyager Tennis Academy in Sydney, Australia, where he is now based.

According to his mother, Ethan is thriving, mixing schoolwork and tennis every day. Training includes work with coaches like Luke Bourgeois, a former professional tennis player from Australia who was a practice partner for tennis great Roger Federer.

Having played his own part in helping Roger Federer achieve his dream, the coach has now devised a plan to help Ethan and Vera chase theirs. We asked him how he approaches the task: “Once we establish a desired goal, it’s my job to use my experience and expertise to map out the small targets required to achieve the desired outcome,” says Bourgeois. “As they say, to fail to plan is a plan to fail.”

For Team Ethan, the biggest challenges have been distance and costs. In order to balance work, school and tennis, the couple split their lives between Singapore — where Moses continues to work — and Sydney, Australia, where Vera balances work and home life. Moses then joins the family on as many weekends as he can.

Once a desired goal is established, map out the small targets to achieve the desired outcome.

Equally, Team Ethan’s plan can be a costly one. “Scholarships have helped immensely,” Vera says. “But it will always be a constant pressure point for us to manage finances as he goes further down this road.” However, the family sees a lot of benefits in chasing their long-term dream: “While some see this as a huge sacrifice, we see a lot of benefits and blessings,” Vera says. “The kids have had the opportunity to live in other cultures and have learnt to adapt to change. This is part of a life education that’s hard to come by.”

If short-term goals don’t go perfectly, the advice is not to give up on the dream. When Ethan was offered a scholarship to the United States at the age of 12, the trip was cancelled at the eleventh hour when Vera couldn’t secure a long-term American visa. After a scramble, Team Ethan accepted the partial scholarship in Australia.

Adapting to changing circumstances is key to chasing your passions. “We can make the best and most meticulous plans with the best intentions,” Vera advises. “But the rug can still be pulled out from under us by factors beyond our control. However, when we stay positive and focused on our objectives, and have creativity and courage, we can overcome.”

So what of Vera’s own long-term passions? Have these gone by the wayside? Interestingly, she says that while clearly missing family and friends are among the things she misses, her new lifestyle does have some fun components to it as well.

A long-time travel journalist and a keen follower of sports, being a ‘tennis Mum’ and following her son to tournaments in Asia and Europe (and his recent win in the boys' Under-14 singles title at the Sydney Medibank Age tournament) has definitely had an upside for her too. “One of my big passions is travelling,” she says. “So I’m lucky that supporting Ethan in achieving his dreams also fulfills mine.”